How can ‘Mama Africa’ and her children benefit from Mother Earth Rights?

As the United Nations (UN) International Mother Earth Day approaches on 22nd April 2012, this show will be exploring how Africa, peoples and nations of the African Diaspora can benefit from the emergence of Mother Earth Rights which is being advanced by practitioners of Earth Jurisprudence, the science, philosophy and practice of ‘Earth law’. Earth Jurisprudence or Earth Law recognises the Earth and not ‘Man’ as the primary source of law and the need to comply with these laws to restore the health and integrity of the whole Earth Community and future generations.

In 2008 the people of Ecuador voted for a new Consti­tution and the first of its kind to recognise legally enforceable ecosystem rights or Na­ture. In 2009 the UN General Assembly proclaimed April 22 to be International Mother Earth Day. Bolivian President Evo Morales Ayma and the Bolivian delegation took the lead in presenting the proposed resolution to the UN General Assembly. Bolivia continues its push for the universal adoption and recognition of the Rights of Mother Earth. After the failure of the UN Climate Change Conference COP 15 in December 2009 to make substantive progress, President Evo Morales declared that he would host the first People’s Conference on Climate Change and the Rights of Mother Earth in Cochabamba, Bolivia. During the 3 day conference the Universal Declaration of the Rights of Mother Earth was crafted.

In fact, Earth Law is a modern term for an ancient practice, for millennia African and indigenous peoples have been living according to the laws of Earth and developed Earth-centred customs and way of life to ensure they maintain the health and integrity of the whole Earth Community, for present and future generations. Due to the devastation of enslavement, colonisation and modern day imperialism, African and indigenous peoples knowledge of how to co-exist with the Earth in harmony has been severely disrupted. However, the rise of indigenous peoples in the Americas has provided a timely window of opportunity for Africans and other members of the human family to rediscover this path if man-made calamities of climate change, geo-engineering, synthetic biology and environmental despoliation are to be averted.

When we think about reparations to Africa and her peoples they must be holistic and encompass climate reparations for the ecological destruction that Africa still faces. We as members of African and African Diaspora civil societies must play a leading role in preserving, restoring and protecting knowledge of our own African cosmovisions in forging a path to create the the kind of post-reparations world order we want to co-create. For those of us who are Reparationists, it is important to advocate for the multi-dimesional aspects of reparations. Reparations is truly a process and it is inter-generational!!!

Tune in to Africa Speaks with Sister Ekua on www.voiceofafricaradio.com on Wednesday 18th April 2012 from 8-10 GMT to share and hear more.

Esther Speaks
I am a Jurisconsult, passionate public lecturer and broadcaster. However, I am most recognised for being a long-standing researcher, campaigner, spokesperson and public opinion former on holistic reparations for Afrikans and their descendants worldwide. 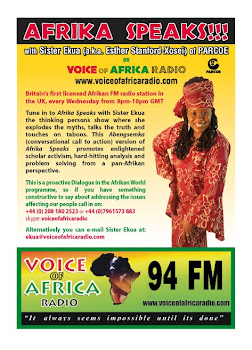 Tune in Every Wednesday 8-10pm GMT 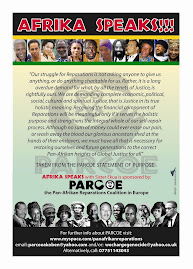